You’ve probably seen Walt Disney’s animated masterpiece The jungle Book, and maybe you’ve even opened the pages of the original Rudyard Kipling stories, but you’ve never experienced it like this before. Until January 8, 2023, the Walt Disney Family Museum invites visitors to literally step inside The jungle Book in the limited-time special exhibit, “Walt Disney’s The Jungle Book: Making a Masterpiece.” I had the chance to attend the opening festivities where the curator of the exhibition Andreas Deja (presenter on The Little Mermaid, Beauty and the Beast, Aladdin, The Lion Kingand many more) was joined by three very special guests who lent their talents to the film.

Attentive visitors may notice that many objects in the gallery come from Andreas Deja’s personal collection. During a panel discussion, he shared that when Disney animators received bonuses for the success of Renaissance-era films, instead of buying a luxury car like his colleagues, he invested in collecting animated works. And since The jungle Book was the first Disney film he ever saw as a child in Germany, it holds a very special place in his heart. 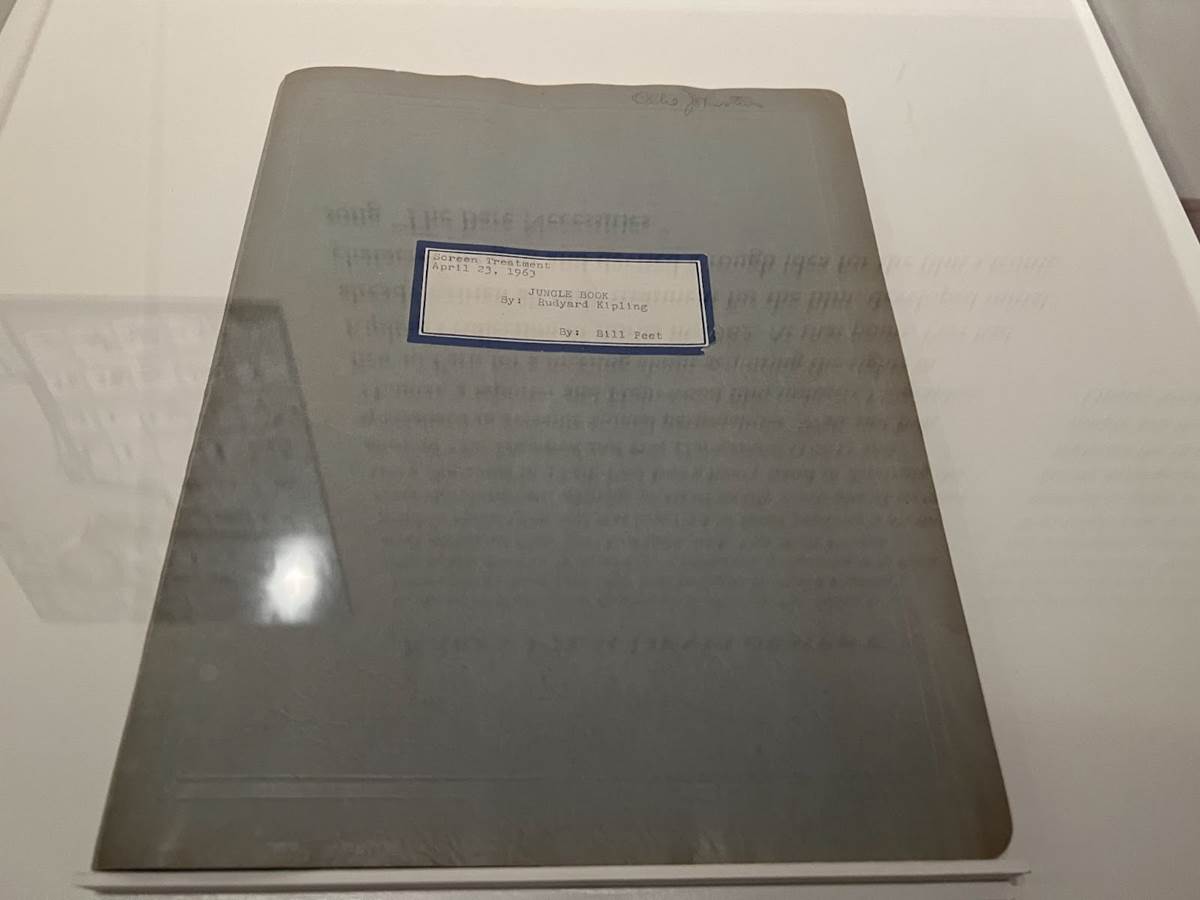 One of the most intriguing items on display is not a work of art in the traditional sense, but a bound draft of Bill Peet’s screenplay and story sketches. Bill Peet was a longtime writer at Disney and had great success as the sole writer on 101 Dalmatiansbut his follow-up effort, The sword in the stone, was a commercial flop. When Walt Disney took a look at his adaptation of The jungle Book, he considered it too dark. A tactile experience next to this draft allows visitors to explore an unrealized version of the film. Bill Peet left the studio as the story changed, and aspiring animator Floyd Norman suddenly found himself working in the film’s story department. Walt’s edict: don’t read the book. 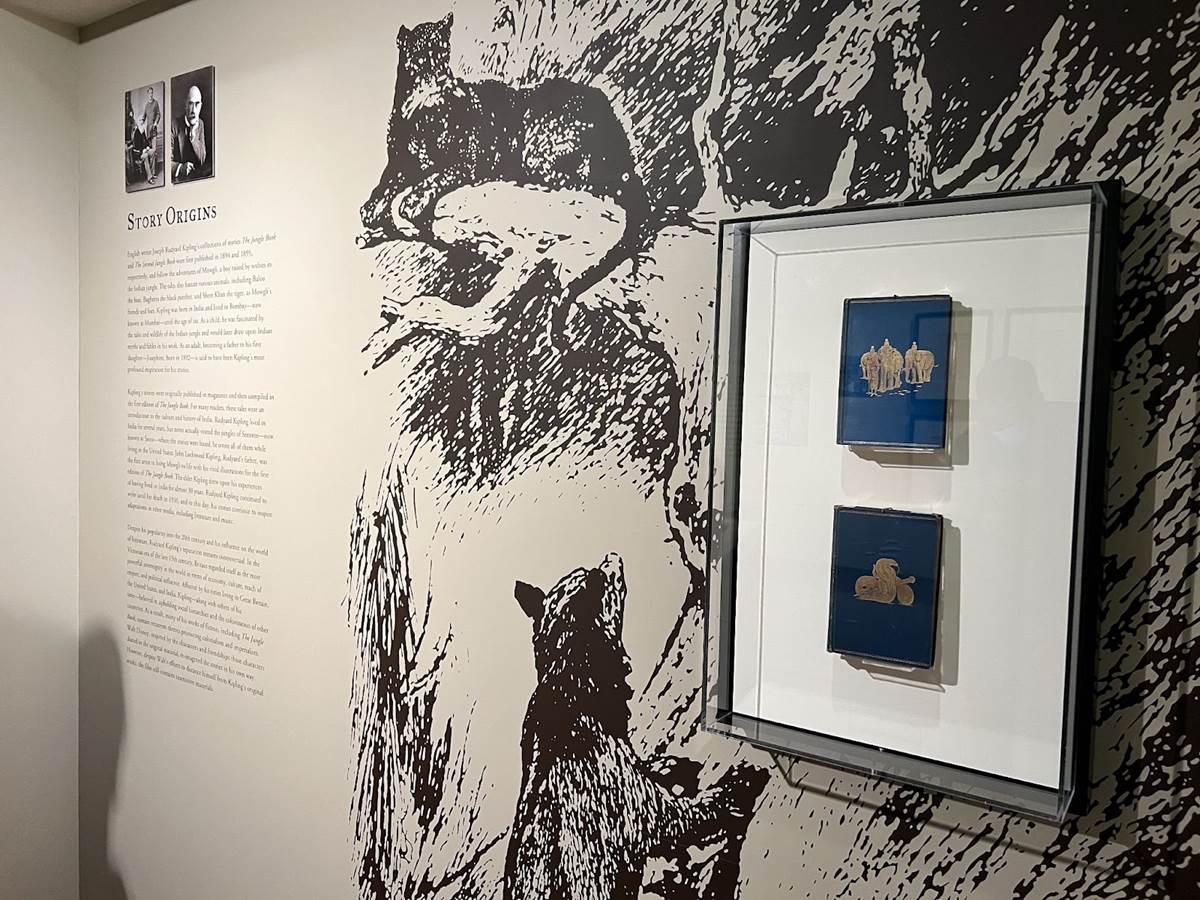 The first and second editions of Kipling’s books are on display, but Floyd Norman took Walt’s advice and did not read them. He revealed that although he had never met Bill Peet, being too shy to introduce himself, he would sneak into his office when the writer was out for lunch to take a look at his story sketches for The jungle Book, which gave him a clear understanding of what Walt Disney didn’t want when he was placed in the story department. As for how he got there in the first place, Norman credits Xerox for allowing gags he drew in the studio to be distributed, which eventually caught Walt’s attention. Among his contributions to the story was the scene in which Kaa the snake hypnotizes Mowgli. 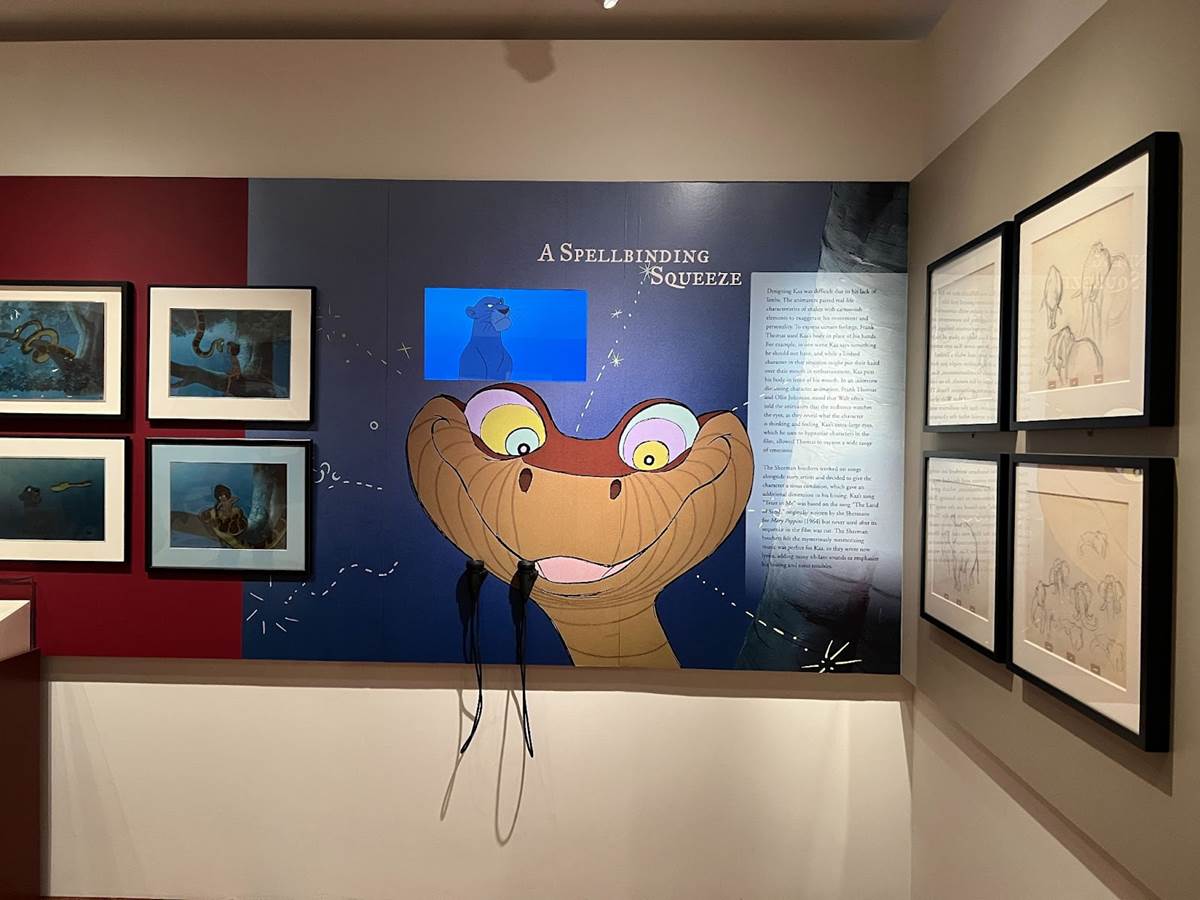 As visitors explore the galleries, there are several interactive elements to try. Kaa themed, kids can interact with the snake and experience what it’s like to be hypnotized like Mowgli. Another special guest for the grand opening was Bruce Reitherman, who voiced Mowgli and is also the son of director Woolie Reitherman. His eyes misted as he talked about how special the experience of working with his father was. Rare photos of Bruce’s live reference footage for Mowgli are on display alongside animation sketches based on his movements. 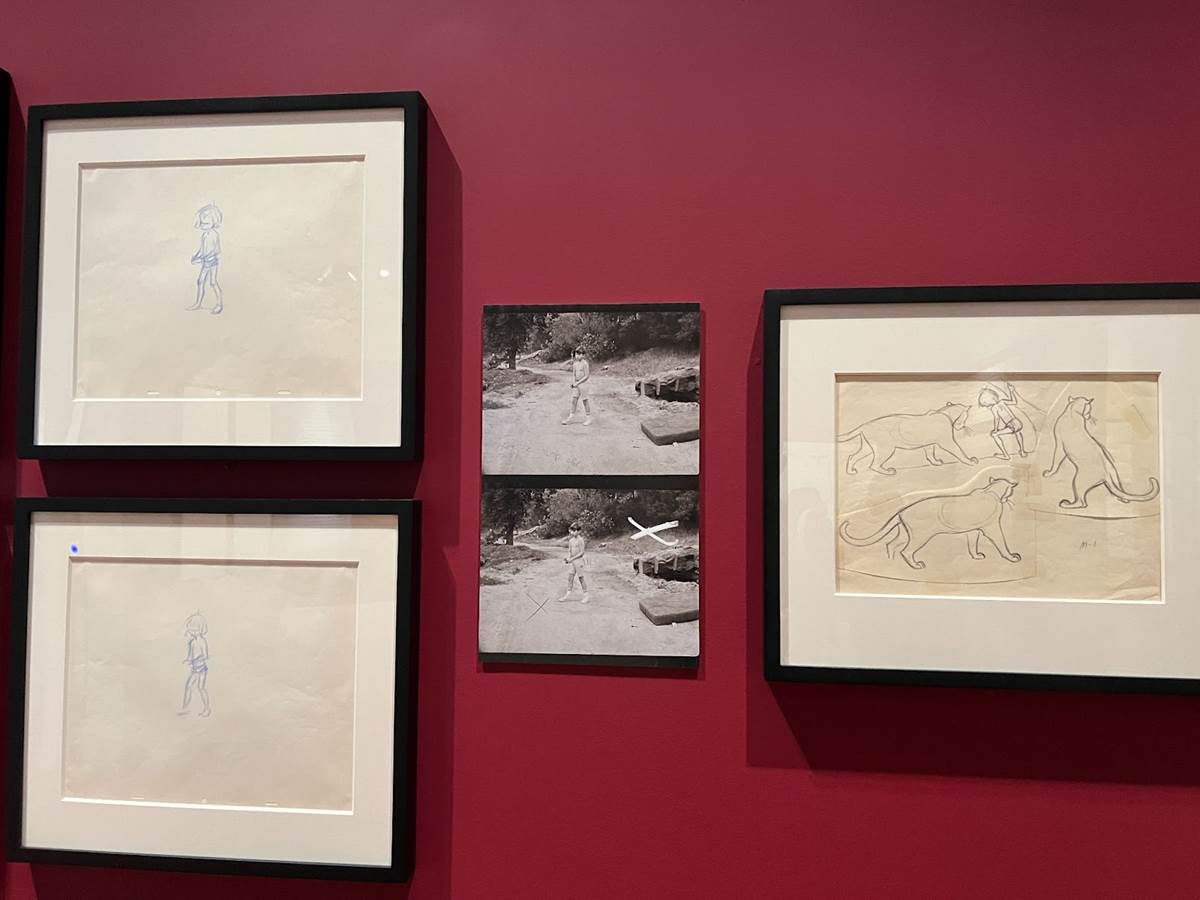 Bruce shared memories of recording his lines for The jungle Book, sharing that it was not a small booth but a large orchestra stage. A gallery of footage from the voice recording sessions also houses an interactive feature where guests can try overdubbing a sequence from the film. Clint Howard was a child actor when he provided the voice of Haiti, Jr. He was unable to attend the event due to a filming dispute, but he sent a video message and revealed that he was very anxious about recording a song because he was deaf. Richard Sherman helped him through the song and during the recording session he noticed a familiar figure from the engineer’s cabin. During a break, Walt Disney came out to tell Clint he was doing a terrific job. Clint was in disbelief at the interaction, and still is to this day. 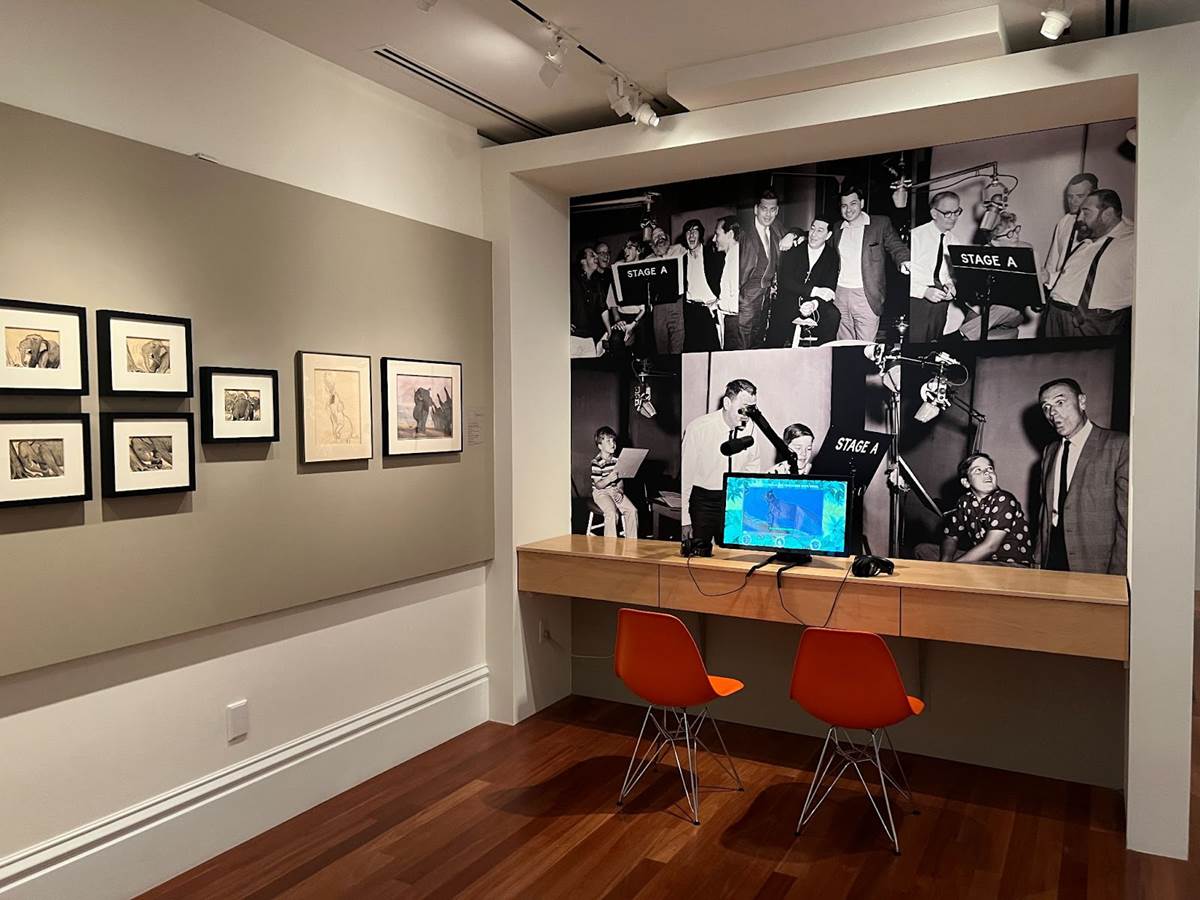 Darleen Carr was the third special guest at fllm, who performed “My Own Home” for The Girl (named after Shanti in The Jungle Book 2). His experience on The jungle Book felt at first like any other mission. She had signed a contract with Disney and was being groomed as the studio’s next Hayley Mills, but was primarily focused on recording music. She was brought in to learn a song with The Sherman Brothers and remembers recording it shortly after. After Walt Disney’s death, her contract was dropped and she got steady work at other studios. It wasn’t until years later that she realized that little song was part of a movie that had become a classic. In a gallery dedicated to The Girl, visitors can see some photos of Darleen providing live reference for the song. 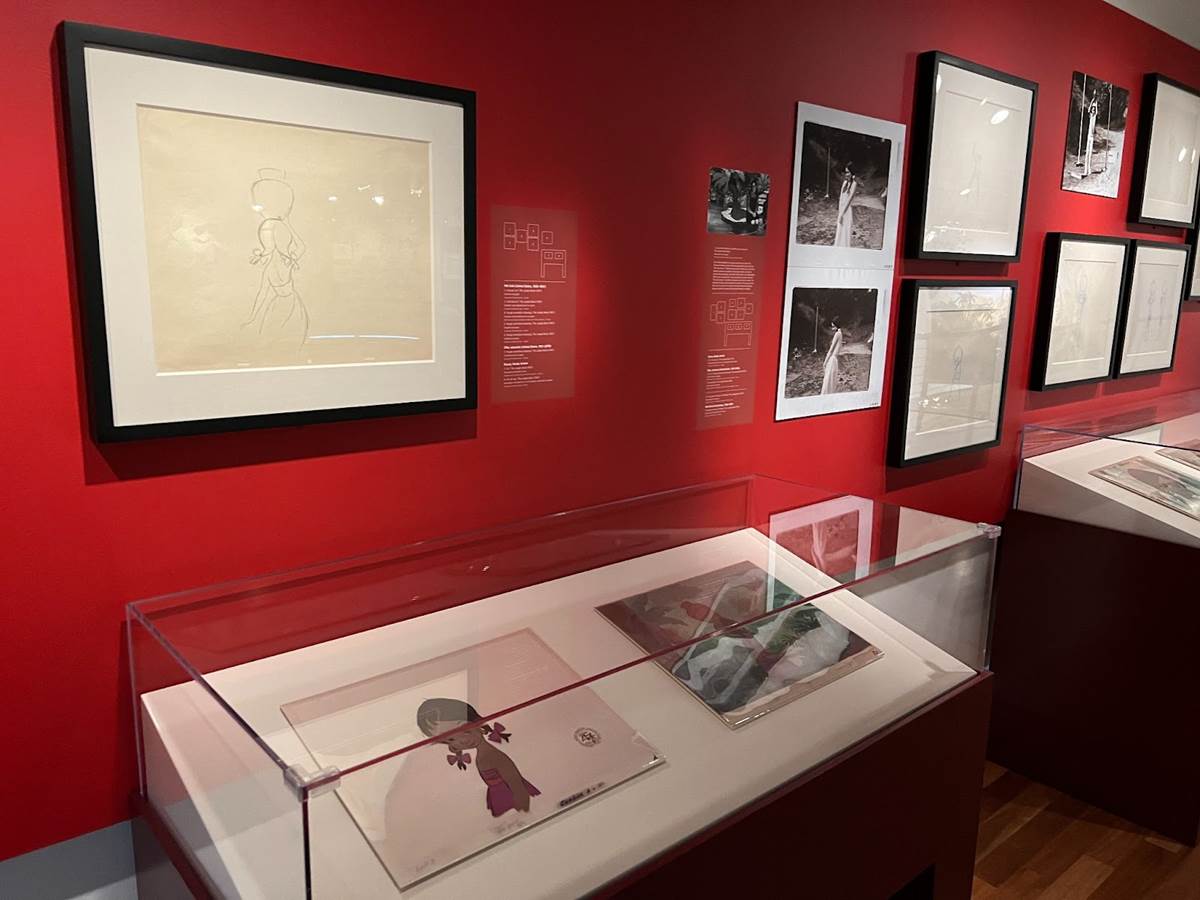 One of my favorite elements of the gallery is how you see the characters evolve through the design process. It’s hard to imagine Baloo other than gray, but lots of colors have been explored. One of the few exhibits is an early color test for Baloo which would have had it in shades of yellow. Beyond production artwork, photos, marketing materials, and a display of merchandise related items from the film’s initial release, there are also some fun photo ops, including the chance to take a picture on King Louie’s throne! 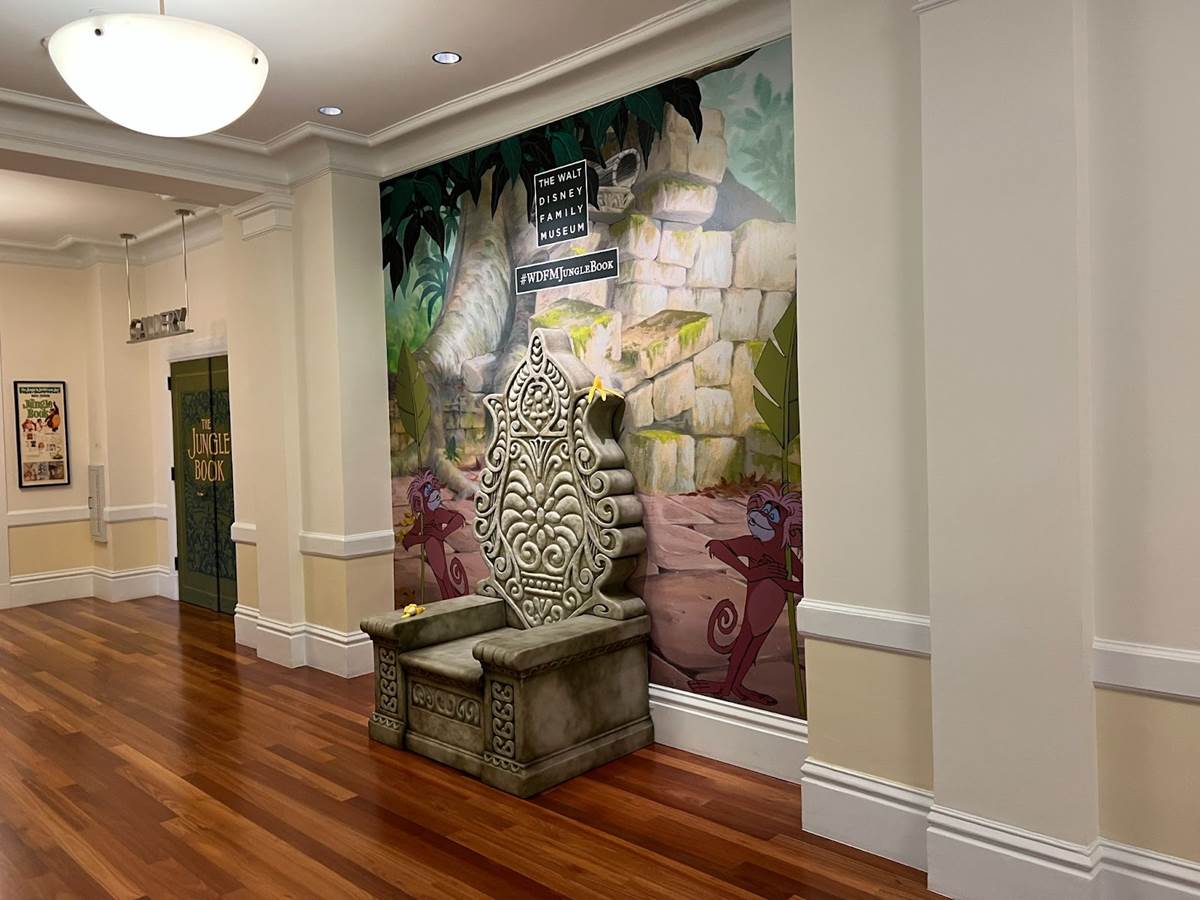 As always, the gallery ties everything to Walt Disney, ending with a note on his passing. During the chat, Andreas Deja shared that while Walt never saw the final film in color, he approved the last rough animated sequences before his passing. So, in essence, he got to see the movie. And Floyd Norman said “The jungle Book is really Walt’s movie. “Walt Disney’s The Jungle Book: Making a Masterpiece” is now on display in the Diane Disney Miller Exhibit Hall until January 8, 2023. Visit waltdisney.org/junglebook for more information on opening hours and ticket prices. 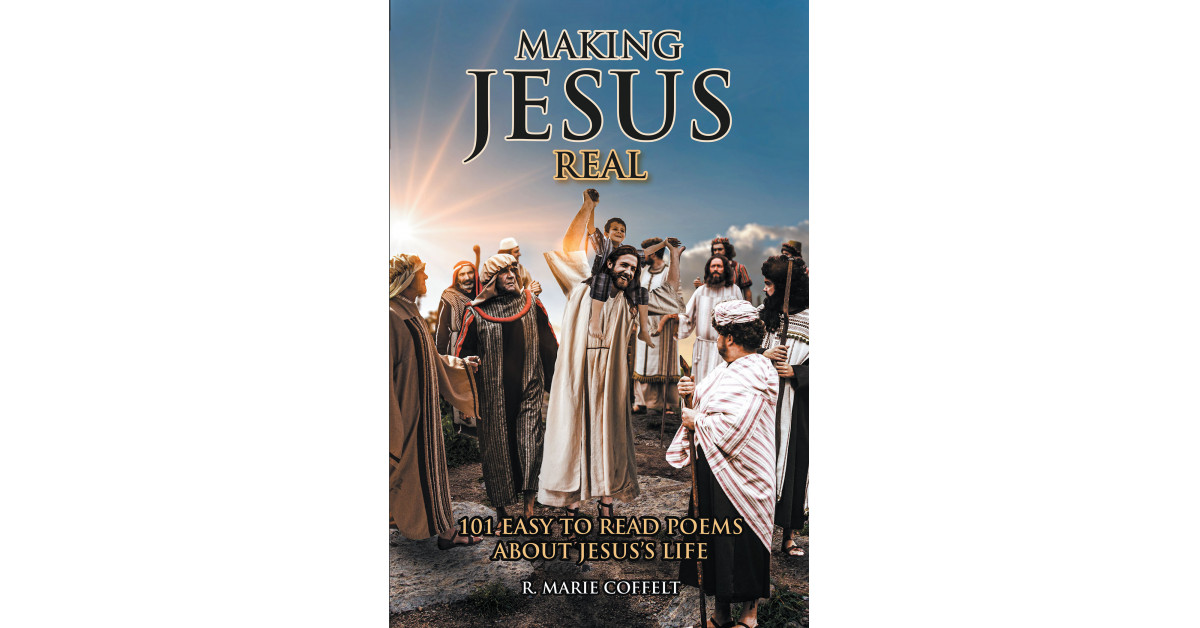 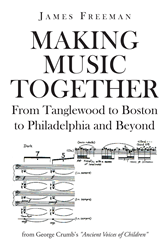 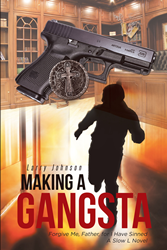 Forgive me, Father, for I have sinned” is a gritty urban story inspired by tragic events in his own life.