Codere will appear on the Club de Futbol jersey

MADRID, Spain and MEXICO CITY, July 12, 2021 (GLOBE NEWSWIRE) – Codere, a leading multinational private gaming company in Europe and Latin America, has taken another step forward in its sponsorship deal with Monterrey Rayados Football Club, MX League of Mexico, upgrading its category to Main Sponsor and its name from “Official Sponsor” to “Official Betting Partner” of the Club, allowing it to display its logo on the front of the team jersey.

The new official jerseys, now from the Codere brand, were presented yesterday during the friendly match between Rayados and Guadalajara, a preamble to the next Liga MX season, which starts on July 23.

Thus, the Rayados players wore the company logo on the home shirt (with the striped shirt), during the first half, and on the away kit (in white and blue), during the second half of the match. Soon, the brand will take pride of place in the club’s stadium, in the Codere “Suite” and other highly visible areas of the hall. 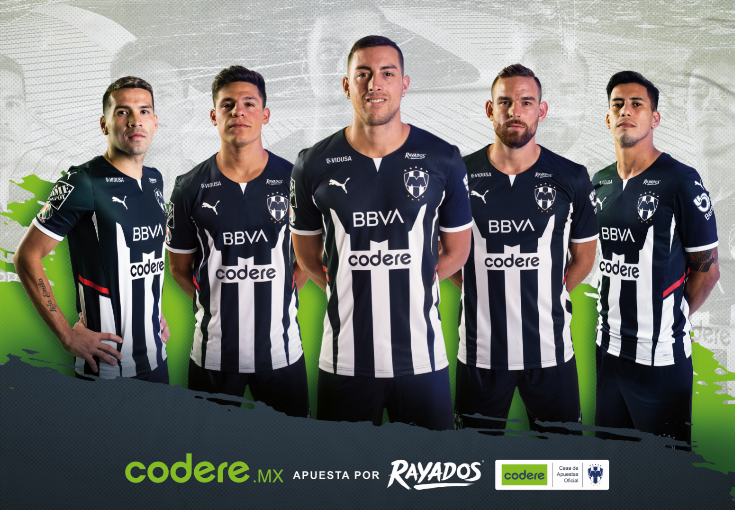 Likewise, the Company today launched a major advertising campaign which will be broadcast on television, radio and digital media through various social networks, both from the club and from Codere, designed to connect with both to the team’s followers and its sports betting clients.

Access the spot of the “History” campaign via the following link.

Over the next few months, various joint marketing actions will be put in place to promote the experience of club supporters and Codere sports betting customers, with access to the stadium, invitations to matches and VIP plans, among other activities resulting from this. perfect match between games and exclusive football-related experiences.

Alberto Telias, Marketing Director of Codere Online, said: “We are convinced that this long-term alliance between the two companies will allow us to grow together and achieve important goals. We could not have found a better travel companion in our expansion trip to Mexico than the Rayados de Monterrey Football Club.

Meanwhile, Pedro Esquivel, Executive Vice President of Rayados, said he was pleased to have Codere as the club’s official betting partner, calling it “a new step that will undoubtedly energize the team, its supporters and football and sports fans”. and the enthusiasm to face the next Mexican League season. “

Mexico, a model for Codere’s expansion in Latin America

Since arriving in Mexico in 1998, Codere has maintained a leading position in providing regulated entertainment games in the country. The sponsorship with Rayados reinforces the company’s objective of growing in Latin America.

Carlos Sabanza, Sponsorship Manager of Codere, underlines the importance of this sponsorship in the evolution of the group after an extraordinary year marked by the strong impact of the pandemic on the entertainment sector, in particular on the gaming industry with the closure of gaming rooms and the postponement of sports competition. Therefore, he underlines, “Our agreement with one of the main clubs in Liga MX in addition to maintaining our agreement with Real Madrid CF, as official betting partner, since 2016, allows us to continue to develop our international brand and achieve our ambition to be the leading company in the Spanish-speaking sports betting and gaming market.

Codere and the Monterrey Rayados Football Club will share the winning combination of entertainment, the best game and the best football, with their sports fans and sports betting customers in Mexico for the next four seasons.

Codere is an international gaming operator, present in seven countries in Europe -Spain and Italy- and Latin America -Argentina, Mexico, Panama, Colombia and Uruguay-, which operates slot machines, bingo seats and sports betting terminals with an omnichannel offering, both press release 3 via the online channel and retail, which include arcades, arcades, 9,200 bars and racetracks.

Codere Online was launched in 2014 as part of renowned casino operator Codere Group. Codere Online offers online sports betting and online casino through its state-of-the-art website and mobile app. Codere currently operates in its main markets of Spain, Italy, Mexico, Colombia and Panama and plans to start operating in the city of Buenos Aires (Argentina) at the end of 2021. Codere Online activities are complemented by the Codere Group’s physical presence throughout Latin America, forming the basis for the region’s leading omnichannel gaming and casino presence.

DD3 (NASDAQ: DDMX, DDMXU, DDMXW) was formed for the purpose of completing a merger, capital stock exchange, asset acquisition, share purchase, recapitalization, reorganization or other business combination similar with one or more companies or entities. DD3’s efforts to identify a potential target business are not limited to any particular industry or geographic region.

Codere is resolutely committed to the development of a game offer with all guarantees for the user. To this end, the group operates by implementing the best responsible gaming practices, promoting transparency and supporting public policies for user guarantees, protection of vulnerable groups and the sustainability of the industry.